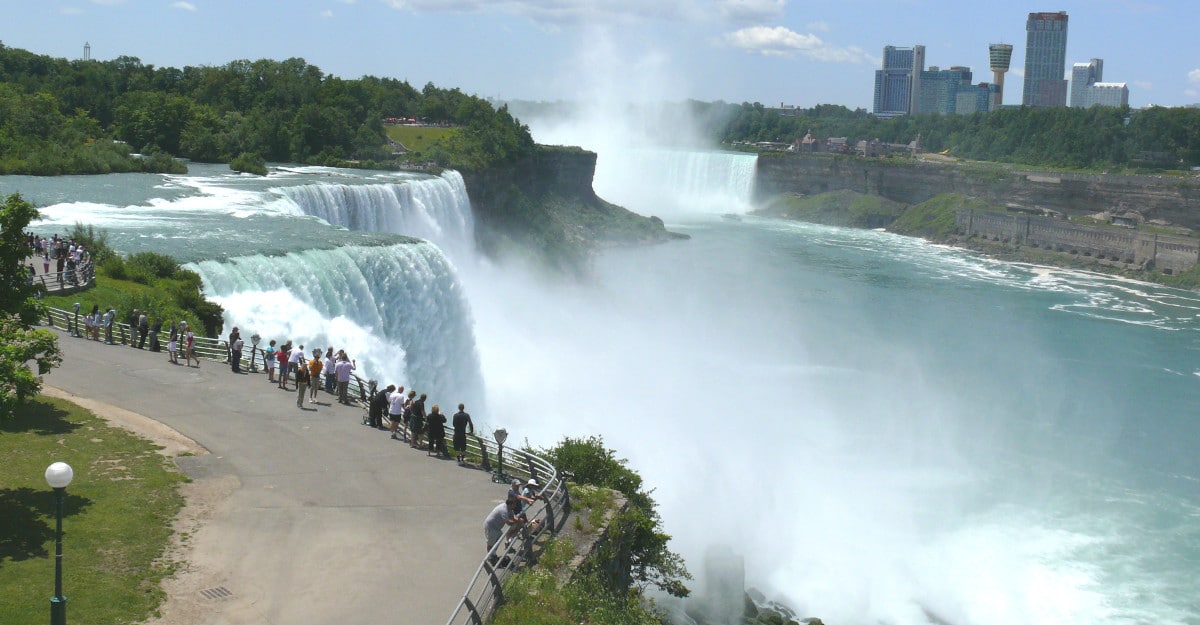 Niagara Falls is a geological wonder, in both its power and scope – a sight that has taken thousands of years to develop. It might come to no surprise that the falls themselves are under the protection of both the USA and Canada as a natural landmark. Careful planning and constant respect for the natural landscape of Niagara have allowed the Niagara Falls State Park to develop into a site that welcomes tourists with both a variety of modern attractions, and the facilities to enjoy the natural attractions on offer.

The state park functions as a locale for tourist activity and a state-protected area for appreciation of the local trees and plant life – and appreciation for Niagara Falls in general. It took fifteen years of lobbying by local environmentalists to establish the Niagara Reservation in 1885 – making this the oldest state park in the USA. The Free Niagara movement had sought to protect the landmark from unchecked industrialisation, and to focus landscape design around Niagara to emphasise and celebrate the natural beauty of the landscape. In fact, the head of the Free Niagara movement was Frederick Law Olmstead – the landscaping architect who designed Central Park in New York City.

Niagara Falls State Park runs along the Niagara River, and the high ground straddling the national border, in a V shape. Its borders also include the islands in the middle of the Niagara River.

The heartland of the state park is Prospect Point, alongside the American Falls. The Visitor Center Complex at the base of this point is the information hub for the parklands, with a built-in theater and exhibits. The surrounding Great Lakes Garden is only just shy of 2 acres but immaculately groomed and styled to depict the geography of the river and the Great Lakes region.

At the end of Prospect Point is the main observation tower for the parkland, standing 282 feet above the gorge. At the base of the tower, the Maid of the Mist ferry docks in between carrying visitors right to the edge and into the dense spray of all three Niagara waterfalls. The ferry service has been operating for over 150 years, but just one season in Niagara Falls, NY, USA. It is considered one of the key tourist activities in Niagara.

On the edge of the parkland’s boundaries, near the Rainbow Bridge, is the Niagara Gorge Discovery Center – a celebration of the long history behind the Niagara region with interactive displays and various activities for young and old. The building also acts as the Trailhead Center: a central hub for the various hiking trails along Niagara Gorge.

The mainland area of the park has other features, and more attractions just outside its official orders – notably the aquarium situated near the Discovery Center, housing more than 1 500 marine creatures on display – but the parkland itself and its features extend into Niagara River itself, and the various islands that separate the single river into the various waterfalls that flow over the cliffs.

The largest of the landmasses in the middle of Niagara River is Goat Island. It’s a major tourist epicenter and the main point of access for all the other smaller islands gathered on top of the waterfalls. The island is a 70-acre landmass, mostly covered in natural woodland. There are no permanent residents, and the tourist buildings are gathered along the cliff side. Terrapin Point, overlooking the Horseshoe Falls, is Goat Island’s signature observation point and one of two major viewing decks on the New York side of the falls (the other being Prospect Point on the mainland). The nearby Top of the Falls Restaurant, open seasonally, offers regional culinary specialties along with a panoramic view of Horseshow Falls through the full-length windows.

The cliff side edge of Goat Island runs from Terrapin Point to the Bridal Veil Falls – the central Niagara waterfall and the smallest of the three. This corner of the island displays relics of Niagara’s history, including a reconstructed archway from the nationally protected Adams Power Station, the first large-scale hydroelectric power plant to generate AC electricity in the world. A statue to Nikola Tesla, the pioneer of the active current, stands nearby.

The Cave of the Winds complex sits on the riverbank at this point – with amenities and a gift shop. It’s also the entry point for the iconic Cave of the Winds trip. An elevator ride 175ft down the cliff side takes visitors to a series of wooden walkways – dismantled and reconstructed every year to prevent water damage – towards the Hurricane Deck. This viewpoint is only 20ft away from the rushing water of Bridal Veil Falls.

The other landmasses that surround Goat Island provide additional viewing points of the falls. Only a handful of these islands are accessible by the public, all from Goat Island via footbridges.

Near the Cave of the Winds Complex is Luna Island, the landmass that separates the Niagara River into the American Falls and the Bridal Veil Falls. It’s an undeveloped island that acts as a natural observation point for the falls.

The Three Sisters Islands are off the west shoreline of Goat Island. Aside from being a vantage point for viewing the Horseshoe Rapids, it was once a centre of activity for Iroquois shamans – modern psychics believing these islands to be a point of spiritual communion.

Finally, the main pedestrian bridge between the mainland and Goat Island also runs through Green Island. Like the other islands in the area it’s essentially uninhabited but provides some additional views of the surrounding Illuminated American Rapids.

The total land area of the state park isn’t overly large compared to other national parks and reservations – but it is a landmark nonetheless, both in its history and the dramatic splendour of its location. Everything in the park is a testament to the locals’ respect towards the landmark the community has been built around.

Visit Niagara Falls State Park during your upcoming Niagara Falls Vacation. Enhance your experience by staying at the #1 ranked TripAdvisor Hotel, the Marriott Fallsview Hotel and Spa. Book a Niagara Falls Hotel Package and save.