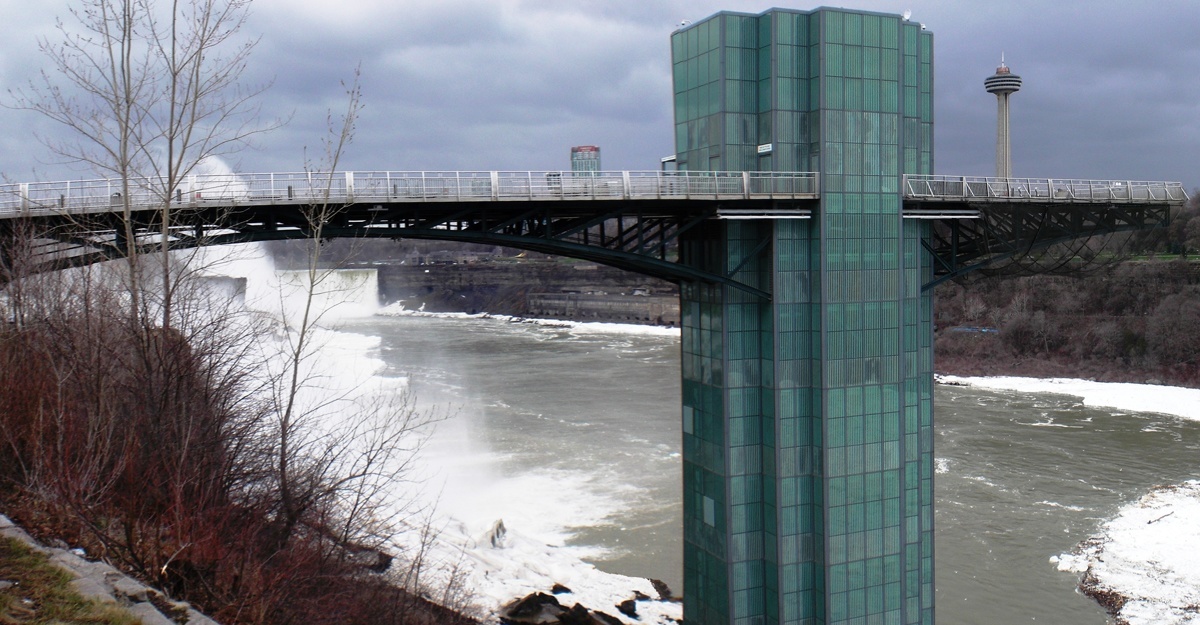 There are a lot of different points from which once can admire Niagara Falls – on both sides of the border. On the United States side of the international line, arguably the best place to get a great vantage point of the Falls is at Prospect Point.

Known as having the only panoramic view of all three Niagara waterfalls at once, the observation tower at Prospect Point stands just east of the American Falls. It’s a striking glass and steel tower on the riverbank of the Niagara River.

At the top of the 282 meter (866 ft) tower itself, a concrete walkway connects with the top of Niagara Gorge. This is the main entry point, and visitors can ride an elevator to the base of the tower, sitting within Niagara Gorge on the riverbank. Here, the tower base also marking the docking station for the Maid of the Mist ferry rides. For anyone also wanting to get up close to the falls as well as find a good view, they can either ride the Maid of the Mist to experience the falls from the river itself, or walk upstream from the tower to find a series of stairs to the ‘Crow’s Nest’.

The main feature of Prospect Point is at the summit of the tower. The concrete walkway that intersects with the top of the tower extends out to form the main observation deck. The result is an unobstructed view of the entire Niagara Falls network. It’s the kind of view that no online photo or video can compare to, and any visitor to Niagara Falls should make a priority to see for themselves at least once.

There’s also a gift shop in the tower for tourists and a Prospect Point cafe, and the connection to the township in the state of New York means that transport and services are close by. The tower is easily accessible from this end in the USA, but also easy to get to from the Canadian township via the nearby Rainbow Bridge.

For anyone wanting a unique view of the falls as well as everything else the vantage point has to offer – birdwatchers will be pleased to hear that Niagara Gorge is a hotspot for bald eagles and falcons – the Prospect Point tower is easily accessible and offers an incomparable view of the iconic falls.

Visit the #1 Ranked Hotel in all of the Niagara Region, the Marriott Fallsview Hotel & Spa. For our best available rates please view our: