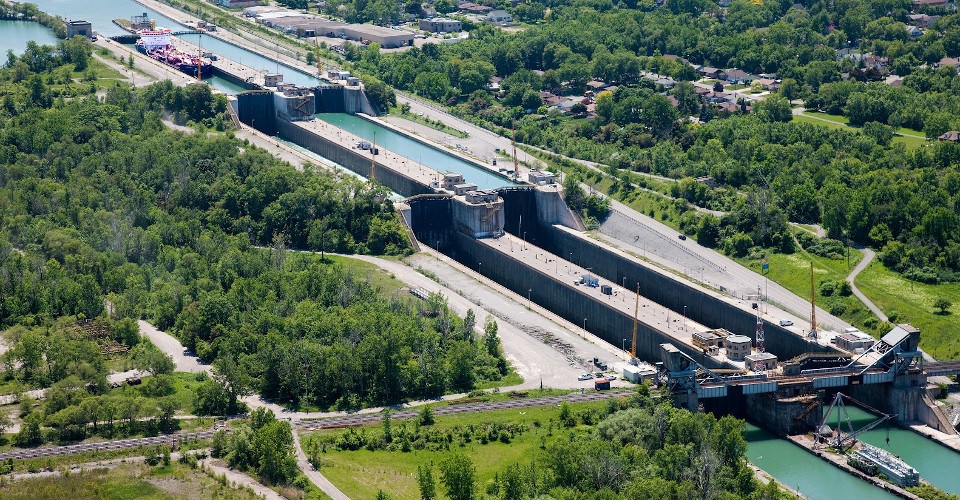 Watching mammoth ships navigate their way through the waters of the Welland Canal is a mesmerising sight. Originally constructed in 1829 as a link between Lake Erie and Lake Ontario, the Welland Canal allows ships a smooth passage in spite of the difference in elevation along the Niagara Escarpment. There are 8 locks (watertight chambers) along the canal which lift and lower these ships using gravity and large quantities of water. It enables the ships to move up and down the escarpment, bypassing the Niagara Falls, making the canal an engineering marvel. The ships are used for transportation of goods and the canal is highly important for this purpose. In addition to this, water from the canal is also used in the industries around the area.

The canal assumed its present form through various stages of construction that happened over the years. William Hamilton Merritt who commenced the project is known as the founding father of the Welland Canal. The first Welland Canal originated at Port Dalhousie and moved along the Twelve Mile Creek onto Port Robinson. Here it was linked to the Welland River which further connected with the Niagara River and exited into Lake Erie. Construction on the canal began in 1824 and was completed in 1829. A few years later, it consisted of 40 wooden locks connected with towpaths along which the ships passed. The Second Welland Canal also used the same route and passed through Welland town and Port Colborne to Lake Erie. By the time of the third Welland Canal that was completed in 1887, the number of locks came down to 26 as a result of a more direct route from Port Dalhousie to Allanburg and then further on. The fourth and present Welland Canal is a more refined version with just eight locks, each 24.4 meters wide, 24.8 metres deep and 261.8 metres long (except for Lock 8), that help the passage of ships along the Niagara Escarpment. With an even more direct route from Port Weller piers on Lake Ontario to Port Colborne, the canal runs perpendicular to the Niagara Escarpment.

At various points, you can watch the ships being lifted and lowered through the locks on the canal. Some of these ships are huge at over 200 yards in length and weighing around 30,000 tons. Gravity and water are used to fill or drain the locks, with the movement of water giving the ships a smooth passage over the canal. At any given point of time, you will find people watching the process from viewing platforms near the locks at St. Catharines, Thorold and Port Colborne. Lock 8, one of the longest locks in the world, has an elevated platform to view the canal. The area surrounding the canal is great for recreational purposes with lovely walkways, trails (especially at Merritt Island) and bicycling paths. Fishing at the picturesque Welland Recreation Waterway, boating and hiking are some of the activities that people enjoy during the summer around the canal.

Numerous Canal viewing points are located just 15 minutes from our hotel. Stay at the #1 rated TripAdvisor Fallsview Hotel, the Marriott Fallsview Hotel & Spa. For our best rates view our: